The project of transportation of heavy equipment from Bronnitsy to St. Petersburg, 2014

In May-June 2014, VIKAR started the transportation of oversized and heavy cargoes on a RO-RO barge. Before performing the transportation of oversized river transport, VIKAR specialists carried out calculations and fastening and transportation schemes, developed and agreed on a Project which included the Loading Instructions, which was developed based on the “Rules for the Classification and Construction of Sea-going Ships”, and “Guidelines on the development of instructions for loading, booklets on the transport of non-grain bulk cargoes and load control devices for ships “Russian Maritime Register of Shipping, which is a ship th document intended for tugboat captain as a guide in dealing with the practical assessment of the safety of cargo operations and loading of the ship, as well as establishes the procedure for loading, unloading and ballasting during transportation of heavy oversized cargo.

Oversized equipment – steam generators – weighing 430 tons, 14.5 m long at a temporary pier in were delivered by road. The BBC for the transportation of heavy cargo was submitted for loading, the first stage was moored to the berth of the empty barge, then the ballasting of the empty barge before landing on the sandy “pillow” and finally the ramp was installed. After loading two steam generators with the RO-RO method on a barge, and installing them on specially-made transport cradles, cargo was fixed to the barge site according to the scheme. The next step was the pumping of ballast to ascend the barge from the sandy “pillow” and additional ballast trimming of the barge for operational landing.

Water transportation route: temporary berthing facility on r. Oka – Sosnovy Bor, Leningrad Region. On the segment of the path along the river. Oka the water level fell, which was not provided for by the Project, so we had to use a specialized dredger to clear the fairway, as well as to ease the barge as much as possible.

The river way of the barge ran, including along the main waterway of the capital, along the Kremlin Embankment – it was a fascinating sight, because the carrying capacity of this project was 1000 tons, and the width of the barge was 15 meters. Further transportation of oversized steam generators was carried out without additional intervention of special equipment and reached the Sosnovy Bor station of the Leningrad Region along the laid river route. 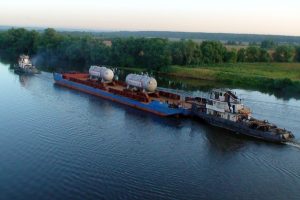 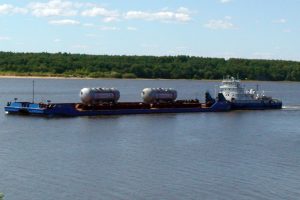 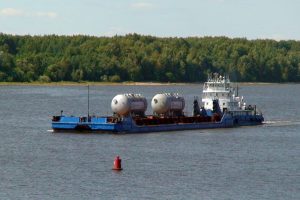 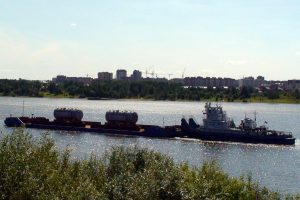 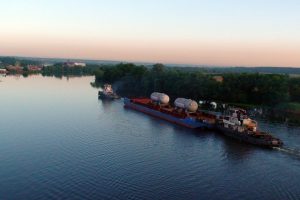 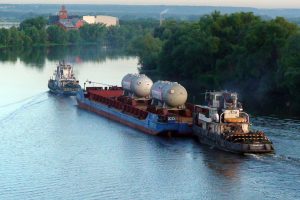 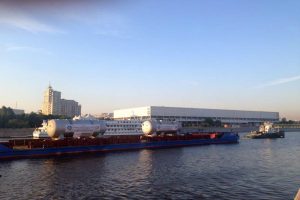 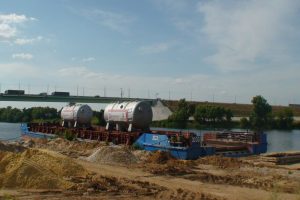 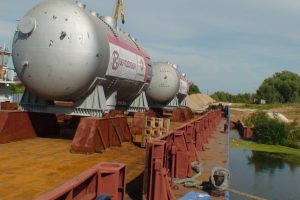 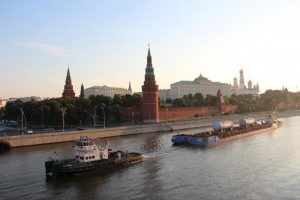