The project of transportation of oversized equipment Volgograd – Nizhnekamsk, 2016

In the first decade of November 2016, VIKAR performed the river transportation of oversized cargo on a barge. Alternately, two large barrels from Volgogradneftemash, Nizhnekamsk, were sent three large-sized columns at the two barges: rectifying, vacuum and topping, for PJSC TATNEFT. Oversized cargoes are intended for the installation of the primary distillation of oil ELOU-AVT6 in the city of Nizhnekamsk.

The first cargo – Distillation column C0202 weighing 356 tons was loaded by crane method to the barge platform “T-1002”, project 81109. Before carrying out the transportation, the engineers of LLC “VIKAR” carried out calculations of the stability of the barge, calculated the places for placing and fixing the heavy equipment, composed and agreed the project of transportation of oversized heavy cargo on river transport on the waterways of the Russian Federation. After loading the heavy column was assigned to the regular places for stability during transportation.
Taking into account the conditions of transportation and the capabilities of the vehicle during the transportation of the rectification column, the tug was replaced on the route. On the Volgograd – Kama mouth, the barge was accompanied by a tugboat “River-84”, and the barge was brought to the place of unloading on the Kamskoye Ustye – Nizhnekamsk pusher tug “Captain Volokitin”.

Specialists of LLC VIKAR in the development of the project took into account all the components of weather conditions, places and options for loading and unloading, the size and weight of cargo, the route and safety of transportation of expensive goods.
The place of unloading of oversized cargo was the berth of CJSC Transkama in the city of Nizhnekamsk.
Unloading method: RO-RO method, dock camera.
At the end of November 2016, the cargo arrived at the place of unloading, where our company had previously prepared and equipped the place of unloading by the method of ro-ro from the barge to the beach of oversized cargo.
Three heavy columns for the oil industry were delivered to the place of destination under the terms of the contract on time, agreed and agreed with the customer. 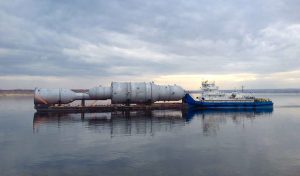 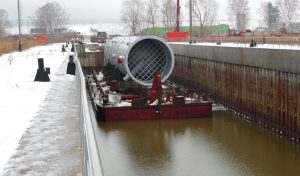 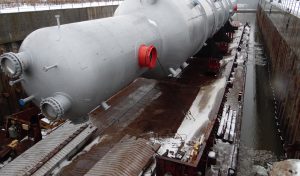 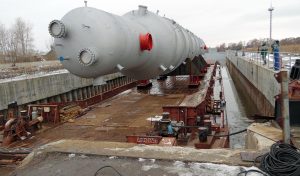 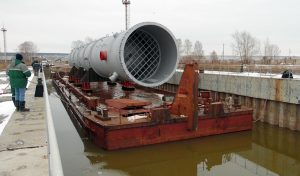 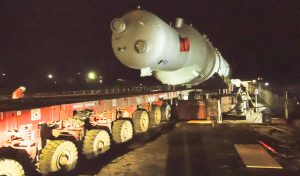 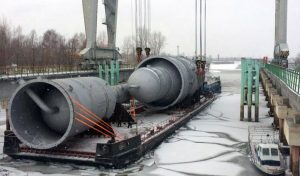 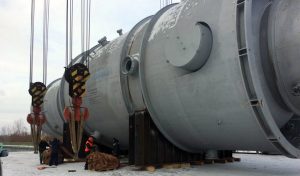 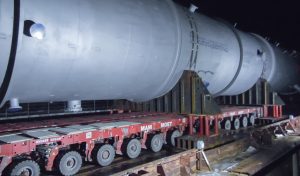 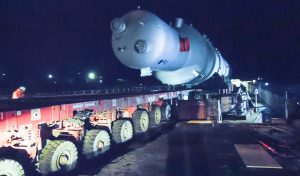 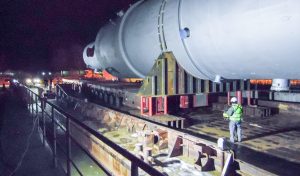 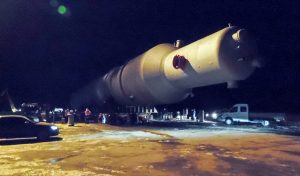